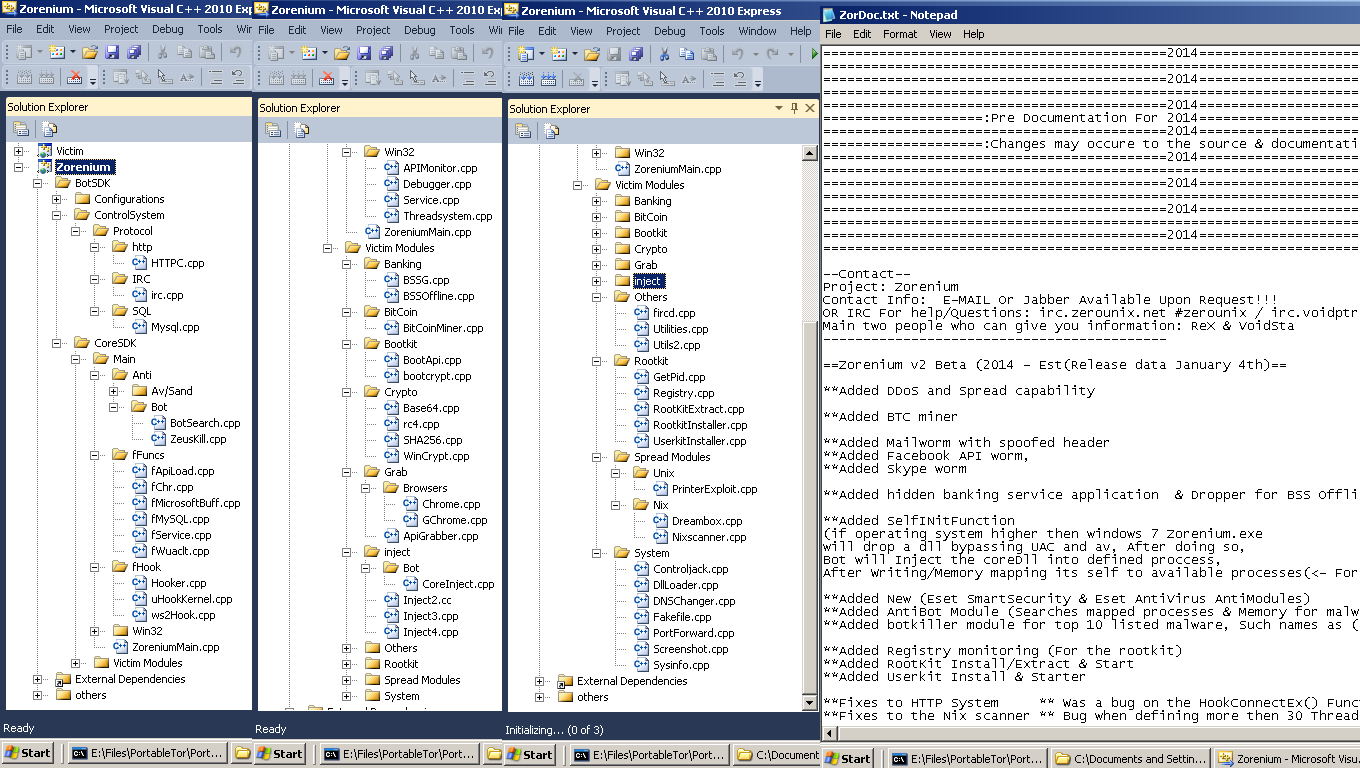 Yesterday some new pastebin posts were picked up and blogged about by Sensecy, before the article found its way onto the infamous threatpost blog (Original Blog Post, ThreatPost, Paste (December), Paste (March)). What’s interesting about these posts is they imply the bot has gone from a barely functional HTTP/IRC bot, to a fully fledged peer-to-peer banking bot that runs on Android, IOS, Linux and Windows. If this bot is real, it would likely be the most advanced trojan ever, however; there’s a few problems with some of the claims (in the pastebin and sensecy’s article).“Zorenium, a relative of Betabot” – Sensecy’s Blog PostWhen asked about betabot’s relation to Zorenium, this was the betabot developers response:<User> How is it related to BetaBot?
<Betabot Dev> i have no idea
<Betabot Dev> it’s not even real
<Betabot Dev> the guy never completed it, as he said himself

“we’ve also updated the rootkit, too a new version of the unreleased – TDL4 rootkit”
The TDL rootkit suddenly stopped updating a few years ago, which suggests the team are either retired or in jail. It’s hard to believe that the team would resurface to sell an unreleased version of their bootkit to some guys who are selling a bot for £2000 GBP via pastebin.

“Zorenium will now run on Ios 5-7 Zorenium will also run on most debian platforms as well as the latest android ipad tablets”
It’s physically impossible for malware to run on Linux, IOS and windows. If you were somehow able to compile all the code required for the 3 different operating systems into a single executable, how would it run? It might be possible in a cross-platform language like java, but Zorenium claims to be coded in C++ and compiled with Microsoft Visual Studio cl.exe (a windows C/C++ compiler).

“After alot of work, testing and money spent. We can now make the victims believe there SYSTEM is being shutdown on victim input, Thus means zorenium will throw fake images to make the user believe hes shutting down his machine. Zorenium will then shut down the screen to standby mode ( until the Poweron button is initialized ) Whilst the user thinks he or she is shutting down there machine, we can stop (Delay) the CPU Fan, and other fans, which will make a racket making the user believe his or her system is still running. remember this method is not 100% Guaranteed to overheat the victims computer, causing it to force shutdown”
Wat.
Not only does this make little sense, but I’m pretty sure there is no universal way to control PC fans. Some motherboards offer software to do it, but the software differs greatly.

“***THERE ARE STILL MORE I NEED TO ADD TO THIS DOCUMENTION, BUT WITH PLAYING CATCH ME IF YOU CAN WITH THE CYBER TEAM, ITS IMPOSSIBLE TO STAY IN ONE PLACE UPDATING THIS DOCUMENT*** STAY TUNED ***”
Some classic attention seeker action right here. Nothing says professional malware developer like running around the country fleeing authorities who are chasing you for a non-existent super bot.

-Update-Sensecy has got back to me on my request, the bot is apparently sold on 1 forum and the seller has very little reputation, still not sure of the forum name though. ## Conclusion

Based on the fact that some of the features aren’t even possible, none of the samples seen have any moderately advanced features, the only evidence of sales is a pastebin post, and no large security company has picked it up; I’m going to say the whole thing is fake.

Obviously I will keep my eyes open for a samples of a new super bootkit banking bot using a private version of TDL4 and speading across windows, linux, android and iOS systems; let’s see how long i can hold my breath.